After a year without crowds the darts’ faithful returned to the Ally Pally for the 2022 PDC World Darts Championship and were unfortunately to be part of the narrative, along with Covid-19. The fact the tournament will mainly be remembered for the right reasons is a testament to the skills and standards of the current crop of professionals.

The pre-tournament favourites were the Welsh duo of Gerwyn ‘The Iceman’ Price and Johnny ‘The Ferret’ Clayton along with the Dutchman Michael ‘The Green Machine’ Van Gerwen. Unfortunately for the Welshmen they found themselves in the same quarter of the draw as each other and even more unfortunately for them as it turned out it was the quarter that contained an inspired Michael ‘Bully Boy’ Smith who would dispatch them both in thrillers.

The incredibly high standards of today’s darts players ensure that there will be highlights and tight matches whenever set play is utilised. The first round brought the leg of the tournament when Willie ‘Big Willie’ Borland beat Bradley ‘Bam-Bam’ Brookes in the deciding leg with a perfect 9 darter. The composure shown in such a crucial leg was instantly replaced with an unbridled show of emotion as the final dart nestled in double 12. It was the first ever 9 darter in a deciding leg in a televised tournament. History for the young man from West Lothian.

The first round also produced another 9 darter – by a defeated Darius “Lucky D” Labanauskas – and defeat for the “Queen of the Palace”, Fallon Sherrock. Amongst those to make their Ally Pally debut were players from Canada, Australia, Japan and the Czech Republic as darts global reach continues to grow.

The 2nd round produced its’ share of shocks, tight games and stirring comebacks but for drama nothing beat the game between Alan “Soots” Soutar and the seeded Mensur “The Gentle” Suljovic. The Austrian appeared to hold a comfortable lead and had match darts as early as the 3rd set. But Soutar never gave up – and despite a verbal roasting from the crowd – battled back to win a thriller having survived a total of 8 match darts against him. Soutar would be back to the day job over Xmas as a firefighter in Arbroath and as his fellow contestants were enjoying their turkey in between practice sessions he was putting in shifts at the fire station on both Christmas Eve and Christmas Day.

The return to the Ally Pally after Xmas saw the tournament hit hard by Covid. Three seeds – Van Gerwen, Vincent “The Dutch Destroyer” van der Voort and Dave “Chizzy” Chisnall – all had to withdraw leading some to say that the tournament should be halted. But the PDC insisted the show must go on. And although it was diluted the 3rd round still produced some cracking matches.

Dirk “The Titan” van Duijvenbode produced a stirring comeback, Soutar was again embroiled in drama – just edging out the seeded Jose “The Special One” De Sousa in a marathon – but the match of the round involved the defending champion, Price. His battle with Kim “The Hurricane” Huybrechts swung one way and then the other before going to a tiebreak leg which the number one seed won.

Like its’ predecessor the fourth round had a healthy proportion of tight matches. The now suddenly popular with the crowd Mervyn ‘The King’ King came from behind to defeat the qualifier Raymond ‘Guru’ Smith and Chris ‘Hollywood’ Dobey just edged out ‘Cool Hand Luke’ Humphries whilst Gary ‘The Flying Scotsman’ Anderson did the same in his battle of former champions with Rob ‘Voltage’ Cross.

But the match of the round and – in terms of quality at least – the match of the whole tournament saw Smith edge out Clayton in a thriller. The standard of play and excitement would have merited a final showdown and it was a shame that Clayton had to exit so soon given how well he was playing.

And so we reached a last eight made up of players from England, Scotland and Wales. There was no surprise that there were players from those countries present at the business end of the tournament, just surprise that they were the only countries represented. James ‘The Machine’ Wade and Anderson both had comfortable wins but Peter  ‘Snakebite’ Wright and Smith were pushed all the way as they joined them in the semi-finals.

Wright – who changed darts midway through the game -considered himself fortunate to squeeze past youngster Callan ‘The Riot’ Rydz who will rue missed opportunities but has plenty of opportunities ahead to show he’s learnt from the experience. Smith had to endure a pulsating match with the defending champion who hit the third nine darter of the event. Eventually breaking the Welshman’s throw at a crucial juncture in the final set.

The semi-finals didn’t deliver a deciding set but they were enthralling. Smith always looked the better player against Wade but you can never count out an excellent finisher like The Machine. However on this occasion Smith’s scoring power proved too much and he ran out a 6-3 winner.

Talking of scoring power in the other semi-final Wright broke the record for 180s in a single match by throwing 24 of them as an electric start saw him race into a three set lead. Anderson came firing back and just as it looked like a deciding set might be required Wright edged out the 10th set 3-2 for a 6-4 win.

The final – on January 3rd – to crown the first world champ of 2022 was a blockbuster. Wright went 2 up but was quickly pegged back to 2-2. There were also level at 3-3 and 4-4 and when Smith broke in the 9th set to take the lead he was very much the player in the ascendancy and looked the likely winner.

However it was not to be for Bully Boy as Snakebite produced – at the pint he needed it most – a run of darts that anyone would have found hard to live with as he reeled off three sets in a row with averages well into three figures to win 7-5 and pick up the Sid Waddell trophy for the 2nd time.

The great matches and the high standard of play had overcome the Covid disappointments. The crowd behaviour had probably tipped over from raucous to jingoistic on more than one occasion but those on the receiving end had done ok. The Scots – not the only nation to receive abuse – had proved they don’t get battered everywhere they go with all four entrants having a tournament to remember and the winner joining his fellow Scots, Anderson and Wilson, as a two champion of the world.

The sport is in good hands with the number of youngsters coming through and the continuing emergence of players from around the globe. The sport’s ruling body also deserve praise for their support of the woman’s game and future generations will most likely see a female champion. 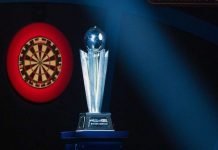