Around 60,000 fans witnessed England’s tragic defeat to the Italians on penalties, while millions watched the game in pubs, fan zones and homes across the country.

Luke Shaw gave the Three Lions an emphatic start to the game after 2 minutes, but Leonardo Bonucci levelled in the second half from a corner.

There were only two goals in the game and Italy won 3-2 on penalties after Marcus Rashford, Jadon Sancho and Bukayo Saka all missed from the spot.

It may not have come home in this tournament but the players have won the heart of countless fans across the country as they were so close to winning their first European title in history.

In the midst of the disappointment, there was a feeling of hope and a feeling that this tournament was a start of a new chapter for the England squad. Under Gareth Southgate, the young squad have the nation with togetherness and hope which has not always been present in past tournament squads.

Former England captain Rio Ferdinand stated that the side brought joy to the masses which his generation and below have never felt before watching an England team.

8 years ago Greg Dyke, the former Football Association chairman, told the nation that England’s targets were to reach the semi-finals of the Euro 2020 and win the FIFA 2022 World Cup. It looks like the team is on right track for the next tournament and with plenty of youth in the side, it could potentially be a bright future for the squad. With players like Bukayo Saka at 19 years of age, Mason Mount and Declan Rice both at 22 years old, Phil Foden, Reece James and Jadon Sancho at 21 years old the depth of the young talent is boding well for the future.

“It will hurt like hell for the rest of their careers but they have made us feel so proud over this last month.”

Frank Lampard also added that there will be lessons to learn from this tournament that will help them in the future. He stated that there were some outstanding performances but the Italian team were more experienced and confident on the ball. Those were the lessons that should be understood but the former Chelsea man said that he saw the team grow and the nation grow behind them.

The advantage that England had in this tournament was the flexibility of the squad. Southgate had his plan set up for each game and it was never the same team out on the field. They may have been questioned early on in the tournament with their defensive set-up and the selection of right-backs in the left-back position but they did overcome the likes of Croatia, Germany and Denmark to get to the final.

With a rigid defensive structure for most of their games with 3 centre backs, two wings backs and two CDMs, England were a very hard team to break down. This led to 5 clean sheets throughout the whole tournament.

Pickford will obviously be devastated by yesterday result in the final but he can be proud to have won the golden glove after many top-level performances in this summer’s tournament.

Also with Pickford, Maguire, Stones, Walker, Rice and Phillips producing solidity at the back, this gave the attacking players the license and freedom to stay higher up and press from the front.

Sterling was one of the stand-out performers in the Euros as he was a nightmare for the opposition team to play against. He was quick and nimble on and off the ball, always ran in behind the opposition’s defence and got into dangerous areas within the box. He was unplayable at times.

He managed to grab crucial goals in the first and third game in the group stage, another against fierce rivals Germany in the last 16 and he won the deciding penalty against Denmark in the semi-finals.

Harry Kane, the captain and focal point in the attack had a slow start to the tournament by his standards but his performances picked up after he scored his first goal against Germany in the knock out stages. From there he led by example and scored the winning goal that led England Men’s team to their first final in 55 years.

He played his striker role well by holding up the play from the front and collecting the ball deep to lay off passes to the overlapping wingers and midfielders. A role he played well at for Tottenham last season. His unselfish play created space for the likes of Sterling, Mount, Saka and Grealish to run at and in behind the defence to create chances. 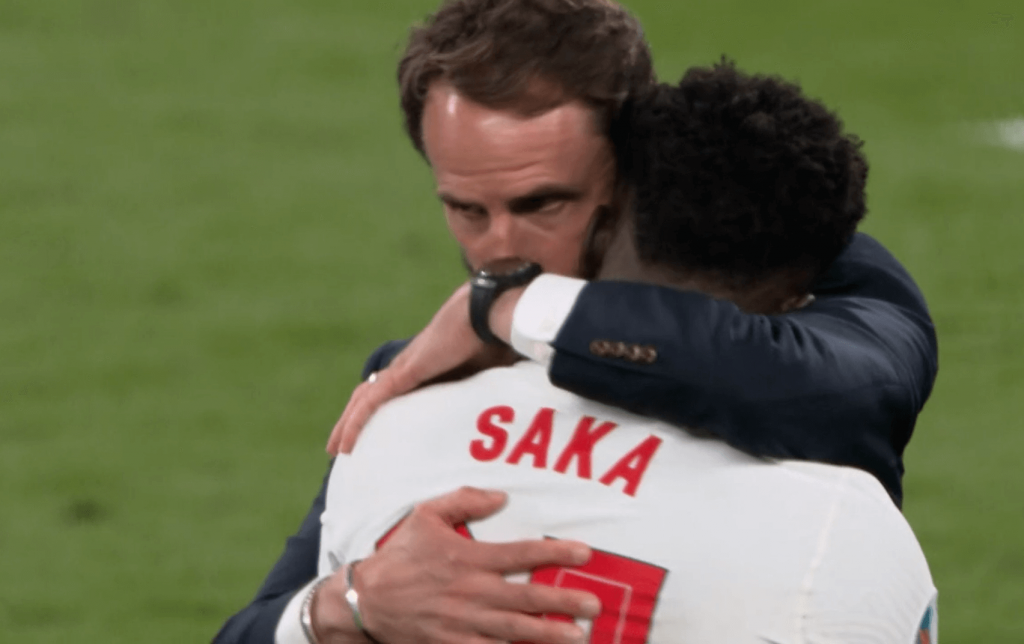 Amid the pain of defeat, the England team could learn a thing or two from the Italians response to a setback after failing to qualify for the 2018 World Cup.

In three years, Roberto Mancini has turned the side into the best European team. They were the best and most consistent team in the tournament and the best team over 120 minutes in the final.

The manager will get fully deserves credit for turning the squad around and getting the right players in to get the job done throughout the entire tournament.

Jermaine Jenas, ex-England midfielder, was impressed by Mancini’s team by saying “It takes a lot to steady the ship when they came into this cauldron of fire and passion and given the support for this England side.”

“I think it was that experience they had at the back that slowly started to shift the tie into their favour.”

While in the final, Italy was the better and more experienced team, age is on England’s side as they had one the youngest squads in the tournament.

With the World Cup round the corner, Southgate has the chance to build on the experience, pain and hurt from this summer and channel the negative energy into positive fuel to achieve something special for the country for the FIFA World Cup 2022 in Qatar.

The England team can hold their heads up high knowing that they played for the badge and made their country proud.