Arsenal being one of the England`s most successful clubs, deserved a bigger and better stadium that they were playing in at Highbury, although the ground was very similar to other older style grounds around at the time, the smaller pitch and closeness of the fans, created a hostile atmosphere for visiting teams, but unfortunately the stadium had become antiquated and tired, even after the club had started to redevelop most of it, reducing the capacity from 57,000 to 40,000.

The opinions from the fans stated that they needed a bigger stadium as many potential supporters were being denied access on match days due to a lack of tickets being available.

So after many meetings and discussions it was decided to relocate the club to new pastures and find a new location was given priority, in 1997 Arsenal submitted the first plans to Islington Council about building a new Stadium at Ashburton Grove.

As with most building projects in London it is very expensive, if the club wanted to build a new arena they would have to self fund it themselves, as the Government were not prepared to help.

Like most clubs, the biggest assets are its players, so they decided to sell some of their star names to help raise the funds towards the new stadium, players such as Nicolas Anelka, Marc Overmars and Emmanuel Petit to name a few were seen a valuable stock.

The club also made some significant new sponsorship deals including releasing a new bond scheme aimed at supporters which helped with the financing of the new stadium including naming rights of the ground, shirt sponsorship and a new kit supplier in the shape of Nike who agreed a twenty year deal, paving the way for guaranteed funding. Ex Arsenal manager Arsene Wenger was instrumental in getting the stadium built, and took a tremendous amount of criticism from the clubs supporters and the media for dealing with the situation the way he did, some say that the club sacrificed the need for trophies to accommodate the stadium, personally I think the criticism was unfair and unjust, as Mr Wenger kept Arsenal in the top 6 in the league throughout the process, for all those who doubted him, would probably now welcome him back with open arms.

The stadium itself is one of the best to be built in the last 20 years, supplying great facilities for home supporters and visiting fans alike, and with the building of Tottenham`s new stadium, North London can now boast 2 of the best stadiums in the country if not the world.

Fascinating facts – There are 32 murals circling around the ground showing players past and present linking arms, players such as Henry, Bergkamp, Dixon, Adams, Rocastle, Brady, and O’Leary to name a few adorn the walls of the new arena.

How the famous can fall, Derby County were at one point sat at the pinnacle of English football, being crowned champions and competing in the European Cup (Champions League) whilst being lead by one of the games greatest managers ever, in Brian Clough alongside Peter Taylor.

Unfortunately things have been on a steady downwards spiral for many years, with owners coming and going, unsettled players, managers in and out and fans wondering what the next disaster would be when it arrived.

Their fears were brought into the light this year, with the club being placed into administration, which resulted in a penalty of 21 points, which affectedly relegated them to the third tier.

Even the guidance of England`s record goal-scorer, Wayne Rooney couldn’t prevent them from going down, even though it must have felt like doing the job with both hands tied behind his back, eventually the strain took its toll and Rooney resigned.

Prior to this the club had enjoyed success over the years, whilst based at the Baseball Ground, which in the 1970`s and 1980`s was probably one of the worst playing surfaces in the country, there was more mud on the pitch than grass. The stands and stadium was very antiquated and needed either replacing or demolishing completely, something which was eventually carried out when the club decided to move and started the process of building a new stadium, hence Pride Park coming into fruition in 1999.

All the off pitch wrangling`s is a shame, as it distracts from the stadium itself, which cannot be faulted and will no doubt be the best ground visited by supporters in the 3rd tier this coming season.

Apart from the marvellous match-day facilities, there is a 165 bed-roomed hotel, restaurants, conference centres` and office space on offer to prospective clients.

The latest news from the club is good, with the sale of he club finally being completed and new owners about to take up the reins, resulting in the club moving out of administration can only be good for all concerned, clubs like Derby, Sunderland and Bolton should not be in the lower leagues, their supporters alone warranty a place in the top regions of the league.

Fascinating fact: When Derby moved into the Baseball Ground in 1895, they had to evict some gypsies from the site, who subsequently left a curse behind, stating that Derby would never win the FA Cup, Derby did however manage to reach 3 finals but lost them all, before finally winning in 1946 and Charlton. Jackie Stamp who scored twice on the day, fuelling rumour`s  that he paid another gypsy to lift the curse the day before the final. 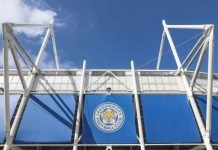 Football Stadia in the UK Part 2: The King Power Stadium and The Stadium of Light