The Milan-San Remo (Milano-Sanremo) annual cycle race is the longest professional one-day race in modern cycling at a distance of 298 km (185.2 miles).

Also known as the Spring Classic (La Classicissima), the Milan to San Remo race was due to run Saturday 21st March 2020, but was cancelled as Italy closed sporting events due to the Coronavirus pandemic.

The Milan San Remo cycling race is always the first classic race of the season, usually on the third Saturday of March in modern times.

The course starts in Milan in Northern Italy, up the Passo del Turchino, and descends to the seaside resort of San Remo on the Italian Riveria Ligurian Coast. The slow 6-hour race finishes in a famous dramatic down-hill conclusion, and with its flat course is considered a favourite of Sprinters (if not beaten by the Cipressa and Poggio).

The competition has been won 7 times by Eddy Merckx (Belgium), widely considered the most successful rider in the history of competitive cycling.

The 2021 Milan – San Remo was run Saturday 20th March, again to be the curtain-raiser for the Italian road race season. It was won by Jasper Stuyven of Belgium with a time of 6:38:06. 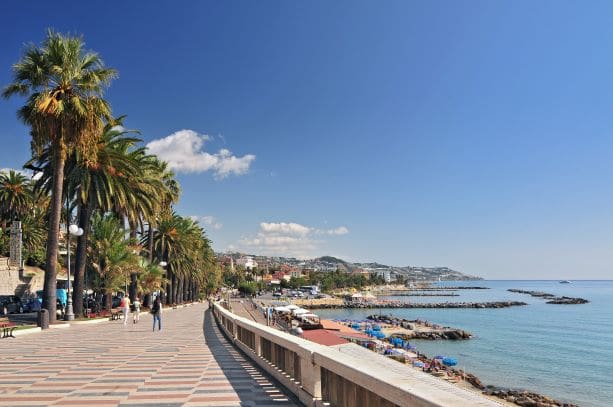 The history of the Milan to San Remo

The first race was held in 1906 in two parts on 2nd April (Milan–Acqui Terme) and 3rd April (Acqui Terme–Sanremo). The first one-day event was held on 14th April 1907 and started at 5am in cold weather. Only 14 of the 33 riders finished, despite attracting some of the best riders in Europe.

In 1910 due to extreme weather conditions, only 4 of the 63 riders passed the finish line. The winning time of 12 hours and 24 minutes remains the longest, but the race entered cycling folklore.

From 1917 to 1928 the great Italian rider Costante Girardengo won six races, with another 5 podium finishes. The 11 total is a record.

In 1997, there was a crash at the finish line involving Laurent Jalabert, Johan Museeuw and Maximilian Sciandri.

The race starts on the Piazza del Duomo in Milan and heads to the southwest. Heading by the cities of Pavia, Voghera, Tortona, Novi Ligure and Ovada to the Liguria coast. After 140km the race hits the first and steepest climb of the day with the Passo del Turchino.

After the descent, the race reaches the Ligurian Sea in Voltri at the halfway point and continues with its spectacular coastal scenery.

In San Lorenzo al Mare the course hits the second climb with the Cipressa, 22 km from the finish.

The final and most famous climb is the Poggio di Sanremo, a suburb of San Remo.

The final 5.4km finish from the peak is a fast descent towards the Via Roma in the centre of Sanremo.

Amateurs can race the route on the 6th June 2021 by registering here. Which Professional Cycle Riders have won the Milan San Remo most times?

How many different nationalities have won the Milan-San Remo cycle race?
As of 2020, 12 nationalities have won the race with riders from Australia,  Belgium, France, Germany, Great Britain, Ireland, Italy, Netherlands, Norway, Poland, Spain and Switzerland
What is the fastest winning time in the Milan to San Remo bike race?
In 1990 Italian Gianni Bugno set a race record of 6h 25 m 06 seconds averaging 45.8 kmh (28.45 mph).