Winner of the top half of the draw, Gary Anderson, takes on the winner of the bottom half, Gerwyn Price. Anderson has gotten better and better throughout the tournament, and didn’t even make our pre-championship tips. He has talked down his chances from the very start, talking only about wanting to get back into playing more regularly and wanting to start enjoying his darts a bit more. Anderson doesn’t take part in the European Tour as he doesn’t enjoy the travelling, so he doesn’t get the big match practice that the others on the tour do, but he has proven time and time again that he’s got the game and the class when his head is right.

Price has a way of throwing people off their game with his constant on stage celebrations, fist pumping and screaming in joy. He frustrates and outright annoys players and has a history with Gary Anderson. The choice of picture isn’t an accident, you can expect to see Anderson wanting to throw his darts and Price celebrating a checkout. Anderson has seemed rattled at times during the tournament and if Price goes into full trolling mode, which is possible if he watched the Anderson vs Suljovic match, to try and get the upper hand mentally. From a purely darting perspective, there won’t be much between them but Price thumped in a record equalling 8 ton-plus outshots in the Bunting match, if he keeps hitting the big numbers (and is as reliable on the D10 as the Semi Final), he could comfortably win.

With the notable exception of the 3rd Round match against Suljovic, Anderson has enjoyed his run through the tournament. That Suljovic match prompted Anderson to talk about retiring from Darts if that’s how the game was going. Mensur was deliberately slowing down the play and also used the wrong table on more than one occasion. Whether that was the intention or not is debatable, the effect it had on Anderson was not. He was furious and frustrated.

The main issue being that sometimes he’d turn and see Suljovic at the wrong table and not want to pass in front of him and interrupt his approach to the oche and other times he’d be at the correct table and Anderson would have to wait for him to approach the oche in order to pass him. Maybe Anderson could have ignored his own opinion principles on not interfering with the other player as it was clear that Suljovic was using gamesmanship to try and put off his opponent. But ultimately, Anderson staged a stirring fightback to take the final two sets (both by scores of 3-0) and win the match having lost the previous two (also both by a 3-0 set score).

Since that match, Anderson has been swatting his opponents aside. Peterson was below par and didn’t really challenge “The Flying Scotsman” at all. Van Duijvenbode couldn’t get his game going, but that was largely because Anderson refused to miss doubles and give him opportunities to work his way into the match. Dave Chisnall had thrashed Michael van Gerwen 5-0 in the Quarter Final but was stopped in his tracks by the brilliance of Gary Anderson. Anderson had chances to take the early sets Chisnall won, but once he had hit the front he refused to let go and won the final two sets without dropping a leg in order to close out the match. Anderson won the World Titles in 2015 and 2016, so he has the experience and the game but he doesn’t enjoy playing Gerwyn Price!

Price has not had it all his own way throughout the tournament. He needed a final set against Jamie Lewis in his 2nd Round match, winning it 3-0. He needed another final set decider against Brendan Dolan and it went to the final leg in the set, which Price won with a D20. He found it surprisingly easier against Mervyn King, who had blown away the dangerous Jose de Sousa 4-0 in the previous round. The final set deciders were back for Price in the Quarter Final against Daryl Gurney. Once again a final leg decider was required, after Gurney had fought back from 2-0 and 4-2 behind to level. Price again held his nerve in the final leg which took him through the Semi Final against the resurgent Stephen Bunting. Price took a 1-0 lead but then fell 3-1 behind before taking it back to 3-3. Bunting then took the 7th set in a final leg decider to lead 4-3 but Price then dropped just two more legs in winning 3-1, 3-0 and 3-1 in the final three sets to win the match.

As mentioned, Gerwyn Price could become just the 10th man to become the PDC World Number 1. He would be joining (in order of becoming the #1 ranked player); Alan Warriner, Dennis Priestley, Rod Harrington, Phil Taylor, Peter Manley, John Part, Colin Lloyd, Raymond van Berneveld and Michael van Gerwen. He needs to win the match in order to claim this ranking, but it seems inevitable that the number 1 ranking will come his way at some point in 2020, Price will want to take the ranking along with the World Champion Title. Michael van Gerwen took the #1 ranking upon winning the World Title in 2014 (and hasn’t let go since). The former Rugby player has only been playing darts since 2010 so his progression has been incredible and at just 35, Price could dominate the sport over the next five or ten years in the same way that van Gerwen has dominated over the last six years. 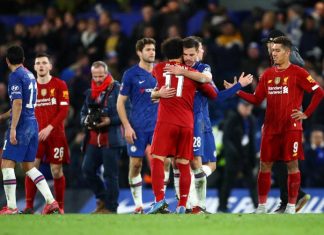 Chloe Frederick - May 14, 2022 0
It’s FA Cup final day, where Chelsea face Liverpool in a rematch after the EFL Cup final back in February. Chelsea will be hoping...

Spurs Vs Arsenal- The Top Four Battle continues with the North...